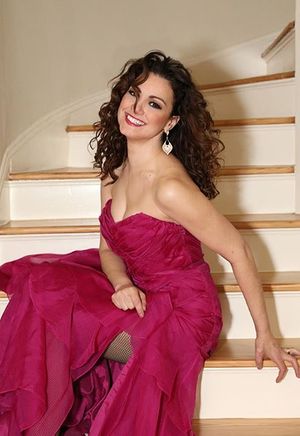 Sandra Piques Eddy, praised for her "dark, sensuous mezzo and charming stage presence" (Opera Magazine) 'a lustrous voice" (Opera News)  "a fine technique, a range of colors from honeyed to bright and charm to burn" (New York Times) celebrates her twentieth year as a professional mezzo soprano this year.

Recent career successes include a reprise of her acclaimed Carmen with the legendary Maestro Seiji Ozawa on tour in Japan, a company debut with Opera New Zealand as Rosina in their Il barbiere di Siviglia tour, critical praise as the title character in The Coronation of Poppea with Opera North on tour in England,  performing and recording the role of Mistress Revels in Carlisle Floyd’s Prince of Players, and creating the role of Young Wife in the World Premiere of Scott Wheeler's Naga, part of the Ouroboros Trilogy, produced by Beth Morrison Projects in Boston.  Sandra recently added several new roles to her growing repertoire;  Dido in Dido and Aeneas with Florentine Opera, Orfeo in Gluck’s Orfeo ed Euridice at Portland Opera, Paula in Florencia en al Amazonas with Pittsburgh Opera, Suzuki in Madama Butterfly with Inland Northwest Opera, and  Meg Page in Falstaff with Opera Colorado Opera.

Sandra made her Japanese debut as Dorabella in Cosi fan tutte with Hyogo Performing Arts Center with Maestro Yutaka Sado.  Sandra returned for more Mozart, this time as Cherubino in Le nozze di Figaro and  returned as a featured soloist at the Hyogo Performing Arts Center for a New Year’s Eve Concert of Timeless American Musicals.  Sandra was honored to be chosen to sing the title role of Carmen on tour (twice)  with Maestro Seiji Ozawa.

On the concert platform, Sandra traveled to England and was a featured soloist in The Seven Ages of Shakespeare Concert with the Birmingham Symphony conducted by Maestro Nicholas Mc Gegan, she appeared as soloist with Harry Christophers and the Handel and Haydn Society in performances of the Mozart Requiem,   Sandra performed Respighi's Il Tramonto with the New York Philharmonic Chamber Ensemble Concert Series.   Sandra made her Carnegie Hall debut as Charmian in Barber's Antony and Cleopatra with the New York City Opera.  The mezzo soprano debuted  Messiah with the National Chorale at Avery Fisher Hall and has since performed as soloist with Baltimore Symphony, Jacksonville Symphony and numerous times with New Choral Society.  Sandra has performed as soloist with the Landmarks Orchestra, the Spoleto Festival,  Anchorage Opera’s, Emerald City Opera, Granite State Opera Orchestra  and at Monadnock and Manchester music festivals as well as multiple benefit concerts for the Savannah Children’s Choir and Sing for Hope.

A Boston native, Ms. Eddy's professional concert debut was with Boston Baroque in Vivaldi's Gloria at Sanders Theater and Portsmouth Music Hall. She has since had several reengagements, including Messagiera and Speranza in L'Orfeo, and Valletto and Amore. in L'incoronazione di Poppea. Boston audiences have also heard her in various roles with Boston University's Opera Institute, including her signature Cherubino, Nancy in Albert Herring, Tieresias in the staged premiere of Merryman's Antigone, and, most memorably, as Sesto in La clemenza di Tito.

Sandra Piques Eddy was the first place New England Regional Winner of the 2000 Metropolitan Opera National Council Auditions and a National Semi-finalist. She has won competitions a both Opera Lirica and the Boston Conservatory. Ms. Eddy graduated from Boston University’s School for the Arts with a master’s degree in Vocal Performance, and was an apprentice artist at the Boston Opera Institute. Additionally, she is a 2002 recipient of the Shoshana Foundation Richard Gold Career Grant.  In May 2017, Sandra was honored with Boston Conservatory's Distinguished Alumni Award.    Ms Eddy is delighted to be on the roster at Longy School of Music as a visiting artist for her fourth year.